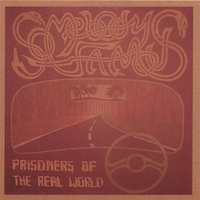 Somebody Famous - Prisoners of the real world (CD)

SKU:
£7.00
£7.00
Unavailable
per item
Prisoners of the real world
Get out while you can
Ramehead
Silvery waves
Petunia
Why we do
Stevie
Buy Now
The musical content of this record is a futuristic soundtrack of six well-crafted songs. Little hints of progressive rock influences and a splash of 70's new wave attitude. Somebody Famous deliver well crafted honest pop songs with hints of progressive rock, and a fiery new wave attitude. Tim Jones' voice has been compared to John Martyn, his musicianship is outstanding.

Somebody Famous were a band that hailed from the North East of England under the leadership of Tim Jones (formerly of Neon & Punishment of Luxury), along with Martin Holder (ex-Jah Wobble) & Mark Dunn. This mini album was recorded for Falling A in 1985 but was not released at the time. Tim Jones recently remastered the original tapes and sounding fresher than ever we have decided to finally release the CD. Tim is now active in two bands, psychedelic folk stars "The Rabbits Hat" and experimentalists "Census of Hallucination" he is also resident Engineer / Producer at Stone Premonitions in Cumbria.

REVIEW
Before Stone Premonitions took off, supremo Tim Jones was in Somebody Famous, and with their recent compilation album introducing the band to the general public, they have now dusted off the tapes of their original 1985 album and released it on Falling A Records. Many of the names on here are familiar to SP watchers like myself, with Paddi on drums and Mark Dunn on bass, and even Terri B providing the graphic design for the sleeve. Despite its vintage you can still tell straight away that it is Jones' band, with the title track sounding very much like The Rabbits Hat in vocal delivery. The spacey sound which permeates most of the SP rosta is also evident here on tracks like 'Get Out While You Can' and 'Why Do We', and with Jones writing all of the material bar the lyrics for 'Ramehead' you can hear pointers to the style of what would later become The Rabbits Hat. 'Silvery Waves' and 'Petunia' are typical Jones songs, with quirky rhythms and offbeat lyrics, resulting in a sound which must have seemed quite out of place when it was recorded nearly twenty years ago. Certainly an interesting insight into the first steps of the people who would later be the backbone of Newcastle's finest independent recording studio.

​This mini album is available in Spotify