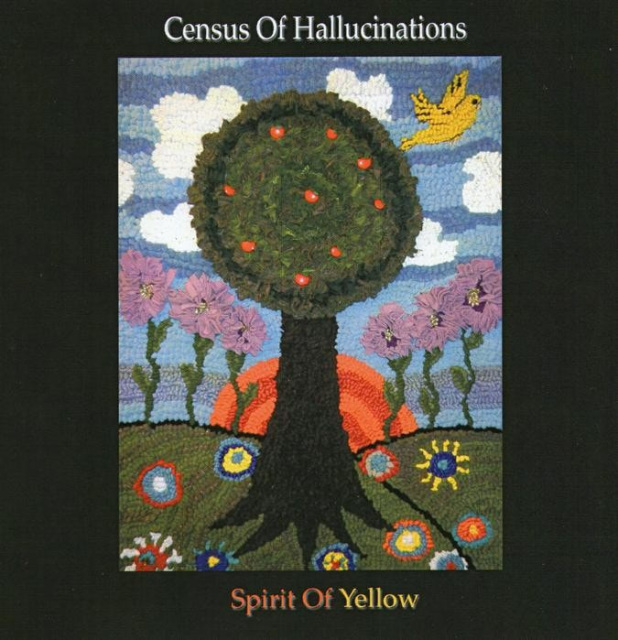 SKU:
£12.00
£12.00
Unavailable
per item
Buy Now
Since Tim Jones reactivated the good ship Census of Hallucinations after a five-year hiatus in 2012 with the release of Dragonian Days (review here) this highly productive band has released no fewer than three full albums, an EP and a double CD-R compilation of instrumentals.

The first focus of this mini CoH special is 2013's Spirit Of Yellow, the first of the three newly-recorded works since Dragonian Days, and the first of a loosely connected trilogy of albums (on Tim's label Stone Premonitions).
There have always been two pivotal aspects to the music of founder members Tim Jones and Terri-B: lysergically enhanced space rock journeys, and idiosyncratic songwriting. Spirit Of Yellow takes up the mantle of songwriting, with reinterpretations of songs from across Tim Jones' long career, as a member of CoH, in other bands and solo. Tim took the chance with this album to re-record old songs with the benefit of up-to-date production techniques, and the result is a well-rounded and highly enjoyable album. Tim wrote all the music on here, and all the lyrics, apart from those for tracks 2, 4, 6, and 9.

A nice blast from the past is the inclusion in this revived line-up of guitarist John Simms, who as a mere 18-year-old back in 1970 was part of seminal and legendary psych-metal band Clear Blue Sky, a name that will be familiar to any record collector. In their early but sadly short-lived incarnation, they were damned good too! Joining Tim and John, is co-founder Terri-B on lead vocals and David Hendry on keyboards, who joined the band for the Dragonian Days album. Multi-instrumentalist Kevin Hodge provides bass guitar and drums, as well as electric guitar and percussion.
These five are more than competent, and provide organic acid-rock with a touch of prog atmospherics, the latter particularly so on Church. Folk-psych protest is present and correct on Riding The War, and John Simms gets to add his own newly composed Bill Nelson-esque guitar and atmospherics with the Part 2 conclusion to the dream-pop of Infra Red.

Good as their possibly more well-known spacerock side is, Ephemeral Fire is a lovely slice of West Coast-influenced psych-folk that CSN & Y would have been proud of, and shows how diverse this band is. The guitar flourishes of John Simms add a neat psychedelic edge to the langourous folk-blues of Mountain Climbing, and Hieronymus is a medieval waltz in space, with a swoon-some arrangement of pure class.

This is a great introduction to the "song" side of Census Of Hallucinations and I recommend it highly. My only regret is they didn't attempt a re-working of the barking-mad rug-cutter Charlatan Express from their debut album of 15 years ago.
​
(Reviewed by Roger Trenwith - Dutch Progressive Rock Page - (www.dprp.net)

Radio interview with Tim Jones about "The Spirit of Yellow"